Origins of ‘Sev’ – The Snack You Can’t do Without! 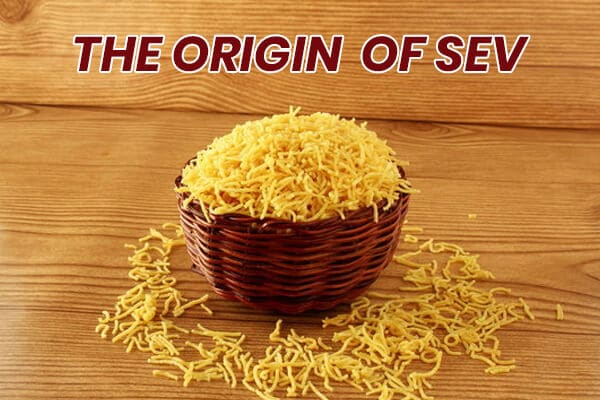 A plethora of snacks originated in Indian states decades ago are still very much close to the heart of every Indian and also those who come here from abroad. India is the land of rich spices and culinary excellence, thanks to the climate and soil suitable for growing wheat, pulse, especially chickpea and potato. So, when it comes to prepare the crunchy tiny sticks of sev, chickpea flour and potato are used significantly.

When it comes to the origin, this delectable snack was first sourced from Madhya Pradesh and till date, it is being used not only as tasty snack item but also side dish with staple rice delicacies.

What Exactly Is Sev?

Sevs are actually crunchy chickpea/gram flour noodles like strips broken into small pieces. While the paste of the chickpea flour gives them a wholesome taste, the seasoning is done with ajwain, turmeric and cayenne, all of which have some medicinal properties. These small parts of noodles are then deep-fried in refined or mustard oil. The thickness of these munchies varies according to states and the choice of people. There are various snack stores in India that offer ready-to-eat packaged sev with different flavour and among them, Yoho namkeen had made a reputation across the country for fresh ingredients and mouth-watering taste.

Sev is often consumed as standalone snack and or as topping on delicacies like papdi chat, sevpuri and bhelpuri. You can also store it in airtight jars for weeks to come. It is the main ingredient in several evening and day-time snacks in different cities of Madhya Pradesh namely Ratlam, Ujjain and Indore. The chat items especially have this as the significant side ingredient. Some of the common such items are Ratlami sev, loung sev, plain sev, Bhujiya, plak sev and tomato sev. The popularity if this snack is even spread across abroad, especially in the UK where Bombay Mix is a common item made out of sev, lentils, pulses and nuts mixed properly.

The History Of Sev

Food historian KT Acharya in his book ‘The Historical Dictionary of Indian food’ reveals that ‘sev’ was first talked about in the 12th Century book ‘Manasollasa’ which was compiled by King Someshwara.

It was the tribal community of Bhil, who came up with the idea of sev about two hundred years ago in Ratlam. They grow corn, wheat and pulses such as gram, pigeon pea, chickpea and vegetables like potato, chili and okra in the vast fields near Ratlam while they resided near the forest. However, as Ratlam is not a scheduled region, these tribal people are now being considered as encroachers of public property and are thus evicted.

In 2014, the Ratlami sev achieved the status of Geographical Indication (GI) with its acceptance among the mass. A common local breakfast named Poha is often consumed with these morning snacks, often of two variants. Besides, the curries also contain sev as garnishing ingredient or side-dish or a handful of sev is served with a dish. It was during the late nineteenth century when the Mughal rulers went on a tour to the region around western Madhya Pradesh and ordered for sewain or wheat vermicelli, which was a dessert. However, wheat was nowhere to be found and then the Bhil tribals were asked to use gram flour to make sewain –this is how the first recipe of Sev was born. The name of this new savory item was given as Bhildi sev suggesting the creators and in the following years, gradually Ratlami Sev came to be known as time pass snacks.

The origins and history of Sev is preserved by Yoho Snacks in a perfect way –there are sevs of different variants and other products containing Sev. From Lemon Bhel to Chiwda, Khatta Meetha to Dal Moth, Navratna Mix to Shev Murmura –there are various items to check out when you are feeling hungry.